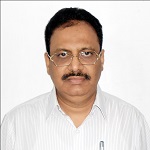 Ghani Khan Choudhury Institute of Engineering and Technology was established in 2010 by the Ministry of Human Resource Development, Government of India with an innovative modular pattern of formal technical education, so as to meet the technical manpower requirements of the region, in particular, and of the Country, in general, at different levels; as well as non-formal education to prepare the skilled and qualified manpower for self-employment as well as industrial employment. These levels include skilled manpower, supervisory level technical personnel and Junior/middle managerial level technical personnel. Whatever budding problems/issues the institute has faced in its formative years, the present management is firmly committed to achieve the objectives envisioned in its establishment and fulfill the aspirations of the stakeholdersof the region

Prof. Parameswara Rao Alapati has completed his Masters degree from Vikram University, Ujjain, Madhya Pradesh and Ph. D degree in Physics from Acharya Nagarjuna University, Guntur, Andhra Pradesh in 1988. He has continued his  Research activities into the Physics of Liquid Crystals as a Research Associate at Indian Institute of Technology, Kanpur, Uttar Pradesh and as a Commonwealth Research Scholar at the University of Southampton, United Kingdom during 1988-1990; and as a Pool Officer of Council of Scientific and Industrial Research, New Delhi at Acharya Nagarjuna University during 1990-91. In the year 1991, he has joined North Eastern regional Institute of Science and Technology (NERIST), Itanagar, Arunachal Pradesh as a Lecturer and has immensely contributed to its establishment and overall development in its right spirit, from its formative years. NERIST was the first ever Centrally Funded Technical Institute established by the Ministry of Human Resource Development, Government of India with an innovative modular pattern of technical education providing multi-entry and Multi-exit  options; which is being followed at GKCIET, Malda at present. His continuous Research and Development activities at NERIST, Itanagar has led to several Sponsored Research Projects (funded by DST, CSIR, MHRD, New Delhi,TWAS-Trieste, Italy etc.), establishment  of a dedicated Liquid Crystals Research laboratory and a FIST-DST laboratory; award of Five Ph. D degrees under his guidance (with Four more Research Scholars working currently); more than 65 research publications in International Research Journals of repute (carrying impact factor). He has organised two national conferences on Liquid Crystals as well as other awareness programs at NERIST and attended many National/International Conferences/workshops; as well as delivered many invited/specialized lectures including Prof. J. S. Dave memorial lecture at M. S. University of Baroda, Vadodara, Gujarat. He has widely traveled, both within the country and abroad, for his research activities and visited USA, UK, Japan,Italy and Hungary; multiple times to UK & USA. He was awarded with the prestigious Scholarships/Fellowships viz., Commonwealth Scholarship(MHRD/ACU), BOYSCAST Fellowship (DST) and INSA – Royal Society, London Exchange Fellowship etc.. He is a Life Member/Member of many National/International Professional Societies and is the serving Vice President of Physics Academy of North East. He has immensely contributed to the administration of NERIST, Itanagar in all fronts and has served on different committees of other organisations also